A Foreigner With a Foreign Message 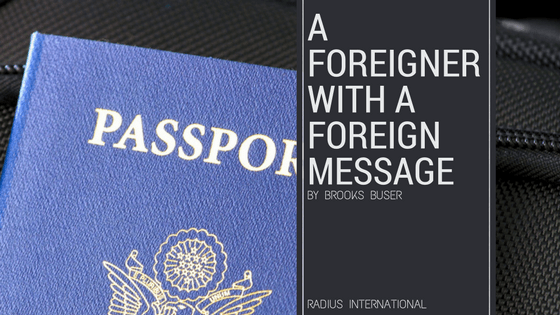 There are many topics that we teach on at Radius that get a lot of time. Intro to Bible Translation, Literacy, Teamwork, Marks of a N.T. Cross-cultural Church and a host of other things get serious time and application to the students. If I had to boil it down though, the two that get hit the most are the theology of suffering and the necessity of language and culture fluency.

One of the privileges I have (this is Brooks writing this one) is to be able to teach the class titled CLA Practicum (Culture and Language Acquisition Practicum). This course is designed to teach the students how to learn a gateway/national language and then a minority language of an unreached people group while using local Mexican Spanish (or Haitian Creole if they already know Spanish) as the proving ground. The students are all on time sheets to see how they use their time in CLA, they are given language evaluations at the end of each semester, hour breakdowns are evaluated weekly, accents (not a North American missionary strength typically) are given strict scrutiny, and the 14 major areas of culture are learned to the point of being automatic. Why all this effort for a language and culture that nearly none of them will use? There are many reasons but the primary one is that the languages they will be learning will most likely be very difficult. If they are trained well in an easy language (Spanish) those skills, confidence, and discipline patterns are more easily transferable to the next context.

The last unreached people/language groups are the last ones for good reason. They are harder to access, live in politically challenging countries for missionaries to gain access to and have difficult languages. If the gospel is ever going to penetrate, disciples made, and churches established in these areas it will most likely be on the backs of teams that took the time to be fluent. Can God use other means? Yes, but fluency is the most viable, biblical, and historically proven method we see in church history.

Consider these three reasons as to why achieving adult fluency is so important to the gospel messenger.

In I Corinthians 14 Paul is speaking about tongues and the necessity of the meaning in tongues to be understood in order to edify the church. If the speaker is not understood, what benefit is it to the church? In making his point he uses an analogy about languages that is helpful. He says this:

“So with yourselves, if with your tongue you utter speech that is not intelligible, how will anyone know what is said? For you will be speaking into the air. There are doubtless many different languages in the world, and none is without meaning, but if I do not know the meaning of the language, I will be a foreigner to the speaker and the speaker a foreigner to me.”

During my time in Papua New Guinea it was always a treat to meet someone from the people group we worked with (Yembiyembi) that hadn’t had exposure to us for the first 5 years. During those early years we learned to live the life of the Yembiyembi and to speak their language. It never got old seeing the look on someone’s face as you engaged them in their own language for the first time. The reaction was usually shock, excitement, then lots of questions.

I’ve been awed recently while reading of the early missionary pioneers William Cary, Adoniram Judson, John Patton & Hudson Taylor and the priority that they put on language fluency. In a riveting quote, Hudson Taylor speaks to the value of the process of learning a language.  Seeking a special baptism of power, the celebrated Cambridge Seven of athletic fame in England arrived in China in 1885 to serve with the China Inland Mission. While sailing up the Han River with J. Hudson Taylor, three of them, C. T. Studd and Cecil and Arthur Polhill, put their Chinese grammar books aside and prayed for the Pentecostal gift of Mandarin and supernatural power according to Mark 16:17. Exasperated, Taylor told his starry-eyed novices: “How many and subtle are the devices of Satan to keep the Chinese ignorant of the gospel. If I could put the Chinese language into your brains by one wave of the hand I would not do it.”[1]

Taylor knew the value of languages; he was fluent in 4 dialects of Chinese.[2] Yet if it was within his power to give the language ability to these new missionaries (C.T. Studd was no slouch) he wouldn’t do it! Why? He knew the value of the journey to get fluent! There is a value that is given to the missionary, his credibility and his dedication to the task. And there is also a value that is bestowed on the message that the missionary is bringing.

If Syncretism can be classified as a world religion, it is head and shoulders the most dominant world religion out there. Whether it’s Islam, Buddhism, Catholicism or, sadly, Christianity, there is usually a component of folk religion and Animism that is thriving under the surface of the publically held belief system unless it has been vigorously rooted out. How does the evil eye, day of the dead, magic, “traditional medicine”, jinn, ancestor worship, and so many other manifestations exist, even among supposed adherents of those major religions? Have Christians been exempted from this? Not by a long shot.

The sad truth is that many “Christians” never fully understood what exactly they were embracing. Stories of this incredible God who can part oceans, heal the sick, and feed thousands were eagerly accepted. But their own understanding of the fall, sin, and the cost of being a disciple was rarely understood. Jesus was accepted as one of the deities/powers/spirits that they needed to have a better life, not THE one true God. Syncretism is usually a by-product of speed, and speed the by-product of pragmatism. To slow down, learn the culture (belief system is part of culture) of the people first and to become fluent will take extra time for sure. But the benefit is that you avoid a syncretized gospel… which is no gospel at all!