Contextualization…Does it mean what you think it means? 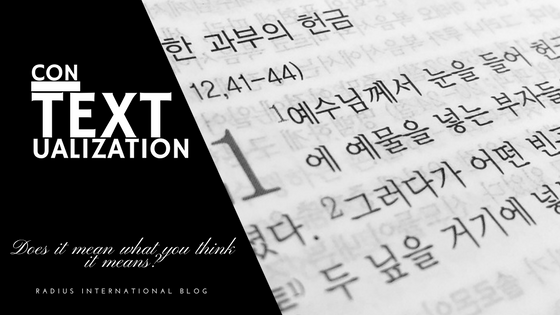 Let’s take a look at what contextualization is, and then we’ll be able to see why language and culture learning play such an important role in the process.

Within cross-cultural missions, contextualization refers to a process that aims to make biblical truth clear within a given cultural context. Missionaries rightly desire to present the gospel in an understandable way to people within different cultures, and to disciple and gather those who believe the gospel into biblically faithful churches that express themselves in culturally appropriate ways.

But clarity across cultures can be a tricky proposition. We grow up with varying assumptions and values that influence the way we interpret the world around us. Learning to bridge the gap between cultures stretches even the most committed missionaries.

First, we contextualize our lifestyle to identify personally with the people we’re trying to reach. Our food, homes, clothing, schedules, and transportation may all change. Where we previously ate dinner at 6:00 pm, we’ll now eat much later at 9:00 or 10:00 pm, and now with chopsticks or our fingers rather than a fork and knife. We’ll now entertain guests in a restaurant rather than in our home—and argue intensely over who pays. Or, in another culture, we’ll receive guests in our home at any time without notice, and quickly prepare a meal for all to enjoy.

Our nonverbal cues must shift to line up with our intentions. On a deeper level, we’ll have to work hard to temper our rugged individualism, to live with more uncertainty, and to seek greater consensus when making decisions.[2] If we want to connect well with our new friends, we must adjust on all these levels.

The apostle Paul famously said, “I have become all things to all people so that by all possible means I might save some.” (1 Cor 9:22b). Desiring to make the greatest possible impact for the gospel, he intentionally contextualized his lifestyle to resemble the way his audience lived (vv. 19-23).[3] Today, we follow in his footsteps when we make similar adjustments.

Second, we contextualize our ministry methods to deliver biblical truth in ways our audience understands. Different cultures think, learn, and communicate in different ways. You’ve probably seen spectrums that highlight these differences—from holistic to analytical, concrete to abstract, circular to linear, indirect to direct. If, for example, you come from a culture that tends toward direct communication, you’ll likely run into misunderstandings when interacting with people from an indirect culture. So we have to learn how to communicate indirectly so our new friends understand us better. Or, perhaps you’ve encountered the orality movement.[4] Some cultures prefer to learn through the spoken word rather than the written word. We refer to this preference as orality. These different ways of thinking, learning, and communicating significantly influence how we teach the Scriptures and, therefore, should be bent toward our new cultural context.

We could also identify specific, and often controversial, contextualized ministry methods like Disciple-Making Movements (DMM), Training for Trainers (T4T), Insider Movements, and the CAMEL method. These methods have developed as adjusted, or, contextualized pathways for sharing the gospel and gathering believers.[5]

Last, but certainly not least, we contextualize the message itself to ensure the gospel accomplishes its intended purpose. Here we find the most important, and most difficult, aspect of contextualization. As evangelicals, we deeply desire to preserve gospel fidelity and so rightly fear tampering with the gospel (Gal 1:6-9; Jude 3-4). We know the gospel itself doesn’t change when it crosses cultures, so then, how do we make adjustments without adjusting the gospel? The best way I know how to address this concern would be to consider what Paul says in 2 Corinthians 10:4-5,

4 The weapons we fight with are not the weapons of the world. On the contrary, they have divine power to demolish strongholds. 5 We demolish arguments and every pretension that sets itself up against the knowledge of God, and we take captive every thought to make it obedient to Christ. (NIV)

Nestled in a larger passage where Paul defends his ministry, these verses give us insight into how he operates. Paul saw his ministry as a battle and his weapons as infused with God’s power.[6] What, specifically, were these weapons? Words, primarily (cf., 2 Cor 6:7)–words that explained the gospel and dismantled the wrong thinking of his hearers (cf., 1 Cor 1:18, 23-24). His words about God and the gospel demolished the intellectual strongholds of his day. In other words, Paul aimed to expose the local worldview as insufficient to answer the deepest questions of the human heart, questions naturally present due to humans being created in God’s image. As Tim Keller helpfully points out, “contextualization is not—as is often argued—‘giving people what they want to hear.’ Rather, it is giving people the Bible’s answers, which they may not at all want to hear, to questions about life that people in their particular time and place are asking, in language and forms they can comprehend, and through appeals and arguments with force they can feel, even if they reject them.”[7]

Every culture sets up its own strongholds that inherently oppose God and the gospel. For example, traditional beliefs in Sub-Saharan Africa include a dependence on intermediaries to harness the power of the unseen world either for their good or others’ harm. We could find similar examples of local strongholds, unfamiliar to our own worldview, all over the world.

Missionaries must evangelize in ways that unmask these wrong ideas. If they don’t they unwittingly compromise the very truth they desire to proclaim, and in doing so, they risk shallow seed-sowing, or even false conversions.

All this lands us at the point I made earlier—good contextualization first requires the ability to speak the local language and understand the local culture. It is impossible to know how or what to contextualize unless you know the culture of the people you’re trying to reach. And it’s impossible to know their culture well without first learning their language. When missionaries enter a new cultural context, they don’t naturally pick up these things without conscious, deliberate effort for many months and even years. We learn a second culture best through observation and questions as we participate in the daily lives of our new friends. And we can only do this well when speaking the language of the heart.

Sam D. Trumbull served over 15 years in Africa and saw three churches planted during that time.

[1] We could, and should, investigate whether these strategies truly are successful, but that’s not my purpose here.

[3] It is important to note, however, that Paul limited his flexibility where biblical revelation required (cf. 1 Cor 9:21).

[5] It is the methods mentioned here that are often cited by missionaries when asked about their plans and strategies. Again, my purpose here is not to evaluate them, but simply to highlight them as contextualized methods. In previous posts, this blog has critically interacted with these methods.

[6] Although Paul saw his ministry as a battle, his gentleness and humility were, on occasion, perceived as timidity. He does not seem to have been pugnacious as is often assumed.