Qualities of a Good Sending Church 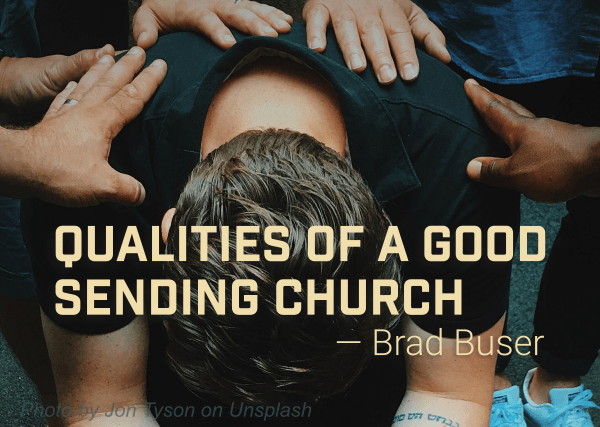 We are always grateful when we hear of the time and concern that most sending churches take with their missionary candidates.  The love and care that the majority of the churches send them to us with is deeply encouraging.  But we also ache for a few students who come out of churches that are very new or naïve in regards to ‘sending’.

No church knowingly shirks its responsibility to its missionary candidates, but, at times, a genuine lack of awareness of the task of the pioneer church planter results in some churches not vetting candidates well before they send them off to get trained. Some assessments that we assume all churches are doing include observing that the individual (or couple) are living in a godly manner, sharing their faith, and growing in the knowledge of the Lord Jesus and His Word. These we generally can bank on.

But some other aspects of vetting are:

Those are just some evaluations to consider.

Another issue a healthy sending church needs to look at is having a robust missions committee. It can go by any number of names but the makeup of that team, and the lead person on that team, are important to consider.  Will a young person in college, or just out of college, feel he can ‘relate’ to the missions committee or, at least, the point person? Too often the general makeup of such a committee is made up of retired saints, those with more time on their hands. Such folks CAN be a blessing to such a team and we are thankful for them. But typically the first place the missionary candidate looks to is their church’s missions committee and if the gap is too large in age/culture it can be a deterrent to those who might take steps forward to pursue church planting.

The role of the Senior Pastor is also critical.  He has countless day-to-day tasks shepherding his church and that is more than a full-time job.  But it is difficult for a local church to maintain a healthy missions push if the Senior Pastor doesn’t regularly endorse the efforts of the missions program of his church from the pulpit.  Having a missions month or weekend is great, but not if the leading voice of the church is silent on this topic for the majority of the rest of the year.

What to do with ineffective missionaries, or missionaries making use of poor methods, is a critical issue a church needs to address.  Does the church have evidence that the missionary speaks the local language effectively?  And on what verifiable data is that determination made? If the rank and file of the church gets a sense that their missions’ monies are being used ineffectively it can greatly affect the backing that the whole church has for missions.  I was recently on the phone with a pastor who had been reviewing the effectiveness of the missionaries that his church supports and he told me he wished he could take 60 of their 70 missionaries off the field today due to poor language ability!  I won’t attempt to elaborate on this issue in the short space of this article as each situation is vastly different, but such issues must be addressed.

Crafting biblically driven policies that guide a church’s missions program can keep a church from being moved all over the map in its missions’ energies.  It is still not uncommon to call nearly everything done off the church grounds ‘a missions outreach’.  I’ve been in churches with large missions budgets that literally had not one of their people extending the gospel to unreached language groups. Establishing policies that lay out the goals of the church in regard to missions is critical. And surely at the core of such policies should be the actual taking of the gospel to every tongue, tribe, and nation! Instituting guidelines that define the type of missionary candidates the church desires to send out is also helpful.  This keeps it from the subjective tendency of “I have a nephew who wants to go to country XYZ and we as a church should support him.” Without thought-out standards in place, it’s too easy to send out folks you actually don’t want to be sending.

There are many other components to being a healthy sending church; these are but a few. As I previously mentioned, it’s encouraging to see more and more churches taking their roles in sending as a serious part of doing church well.  Every church needs to start somewhere though so have patience with those who are trying to move their church towards healthiness in this area.  Maintaining unity within the body — even as rigorous, wise, biblically-driven discussions about these weighty topics are had — is critical.  By doing so we as local churches can trust His blessing will be upon our efforts.