Learning Two Languages: One of the Costs of Finishing the Great Commission 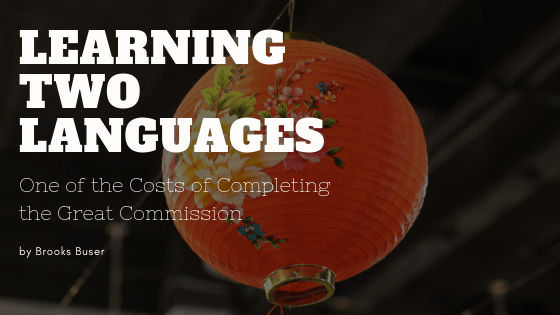 If you have been tracking with the Radius Reports you know that recently a group of us from the staff and board of Radius International (RI) were over in Asia meeting with the board and staff of Radius Asia (RA). The launch date of September 9th 2019 has been set, property contracts were signed last week, potential staff are being interviewed each week, and the board is nearly completed. We have much to thank our God for.

During my flight back from Asia to San Diego, I was reflecting on our meetings with the RA board (mostly pastors and church leaders from the area) and with the Director Wayne Chen. While cultural and linguistic differences abound, the core values and convictions that RI stands on are the very ones that the church in Asia are most excited about. Some of the pastors and leaders from Asia attended the Radius Missiology Conference two years ago (the next one is June 16-17, 2020 in San Diego). Their excitement that the values of the house church movement were right in line with Radius’s core values gave us the confidence to push ahead in this endeavor.

Many of you are aware of the recent challenges that have come to areas under the Chinese government’s control and gospel workers in those areas. Even while we were there a friend of ours that works in that region was taken in for questioning over 5 days and thankfully released but not without having to go through some tough stuff. While many of us are unaware of these things, it is an ever-present reality in that part of the world. If the gospel is going to move forward it will cost many their comfort, freedom and maybe even their lives.

One of the constant drum beats during the 10 months down at Radius is “suffering must be a normal expectation for the gospel worker”. Jesus himself said that “unless a grain of wheat falls to the earth and DIES it remains alone, but if it dies it bears much fruit” (John 12:24, emphasis mine). Jesus was not shy regarding the expectation his disciples should have when embarking on a life of following him. The gospel worker was to put Christ first and all other relationships a distant second (Luke 14:26), expect to live a life of turbulence and uncertainty (Philippians 4:11-13), be willing to endure pain so others can gain access to the message of life (II Corinthians 4:7-12), and must endure trials for the sake of the church he is planting (Acts 20:18-20).

In our day and age, much must be endured to reach the last people/language groups, and many have had to pay quite high prices. In addition to the ones most commonly thought of, I would submit that the painful, humbling, years-long endeavor of learning 2 languages is one of those trials that must be endured. Gone are the days when a widely held language, in the 1st –20th centuries, would suffice to reach an unreached people group. Every one of our students is preparing to learn 2 languages to full fluency. Not because learning a language is so interesting or exciting, but because understanding the gospel is so important. One language is well within the grasp of most people heading overseas. Two languages will take some serious effort, discipline…and pain.

While there is still much work to be done amongst majority language groups (Farsi, Hindi, Mandarin, Bahasa, Melanesian Pidgin, Arabic), availability of the gospel, translations of the Bible, and solid churches should shift the emphasis (Romans 15:18-23) to other languages that still have none of these. But to get to those places, to live among them, and to make the gospel understood will take a longer commitment. A time commitment of 3-7 years will scratch the surface, at best, of these last locations. Issues of how to school children, long-term health implications of living in a developing country, aging parents, are all part of the challenges of the gospel worker who is committed to going to that second/minority language context.

These minority language groups make up the last 3,100 languages that still have no disciples, no word of God, and no church among them. The first language will get the gospel ambassador into the country and many times establishes a platform to work from. But, that cannot be the ending point. As Kevin DeYoung says in reference to “nations” in Matthew 28:19 “As is widely known this is the word not for political nation-states but for people groups. Jesus envisions worshipers and followers present among every cultural-linguistic group on the planet”.  We must persevere and pay the price to learn the next language of the minority people groups that still exist in darkness. The gateway is crucial, but it is not the end of the path.

To the praise of His matchless Glory,

This is a great article about John Piper’s message regarding the Biblical view on retirement. It’s a classic.