Secrecy, Statistics, and Verification in Missions 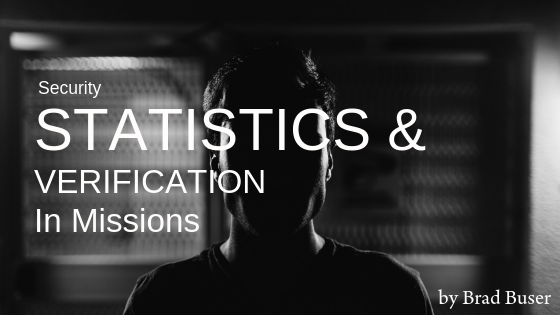 Anyone who is familiar with the current situation in missions is aware of the statement ‘please don’t post this online’.  That’s a needed reminder that helps readers to be careful of the identity of workers who are heading or working overseas.  In the world we live in maintaining a low profile as a gospel messenger in a foreign land is important.  Many ambassadors work for years to establish themselves as non-religious workers.  Jesus himself veiled his full identity for 30 years, and even after his entry into public ministry, he was careful to not fully display that He was GOD IN FLESH! In a similar way, Gospel workers today often times need to ‘veil themselves’ for a season.  Getting into those most remote areas needing the gospel takes work, patience, and wisdom.

When students are attending Radius we are careful about their identity, and their children’s too; we ‘shield’ them. Facial recognition capabilities are real and useful to governments desiring to push religious workers out.  We understand first-hand the need for carefulness.  On the other hand we do a yearly Radius Day where we invite anyone (roughly 100 folks last year!) with a genuine interest in what we are doing to come to our campus, see what we’re about, verify that our staff and students are who we say they are, and ask all the probing questions they desire.  This transparency is critical if what we say is to be taken seriously.  Authenticating overseas Church Planting claims in restricted countries will take more time, effort, and carefulness, but today’s continued use of inflated numbers are creating impressions that are not helpful to completing the task ahead.

As I picked up the latest wide-selling missions book I was again troubled to see not only a disclaimer that ‘some’ of the names and location (it would turn out that no names or specifics are given) must remain anonymous, but even the sending agency that gathered these stories is a pseudonym and there are no countries listed. For a person to be able to cross check the astonishing claims and numbers that are highlighted is very difficult, if not impossible.  Yet, one after another, astounding statements are the staple of the book.

“In the last 13 years, the number of churches in one African country has increased from 50 churches to many thousands.” Pg. 29.

I could go on and give more samples…but the consistent silence on verification is troubling.  I personally have written to the authors and the website they direct you towards, I’d love to be able to rejoice with them.  But the silence is total.  Those who are tasked with verifying such movements have gone on record as being convinced of these movements before being asked to verify them!

Some of you may be asking the question “What is a this ‘movement’ thing?”  The authors, on page 21 give this definition “Disciple Making Movement; A process of disciples making disciples, and churches planting at least 100 churches, with four or more generations of replication.”  (This definition omits the standard line that all this is done in 3 years.) That is truly a remarkable goal, but the idea of “lay hands quickly on no man” continues to be a concern.  Spiritual maturation and developing leaders take time. How can healthy churches birth other ‘churches’ so quickly?

One thing we teach here at Radius is to read, listen, and evaluate carefully.  The concern with this book, and ones like it, is that nowhere are biblical definitions given (pages 21 and 22 list a number of terms that the writers deem essential to understanding the book) for ‘the gospel’, ‘conversion’, or ‘a church’.  None. Yet numerous non-biblical terms, DMM, Discovery Groups, Catalyst, Prayer Walking, and Person of Peace are defined as if they are biblically based, but with no scripture to support these definitions.  Critical biblical concepts go unaddressed, but the non-biblical concepts take on an aura of biblical authenticity. Without a biblical basis for these concepts, we have to wonder… “What ideas are being propagated and embraced? Is Jesus being added to an existing worldview?  What is it that is multiplying so rapidly?” To define non-biblical terms without scripture and to then use these newly introduced terms to support the claims of the book is to build a whole story off of ‘air’.

Readers, I know how easy it was for the Iteris (the people Beth and I worked with for 20 years) to stray from, or add to, the gospel in their early years.   Centuries of DNA were in place that taught them that spirits controlled birth, death, weather, crops, the hunt, sickness, getting a wife and every other significant area of life.  It would take years for “Jesus is Lord over all” to sink deeply into their inner beings, and in those years we taught the Word of God to them 2-3 times a week.  Old ideas are not dethroned quickly.  In an earlier letter, we mentioned Kevin Greeson’s statement that 90% of all Muslims who embrace Christ eventually go back to Islam. Too many statistics and stories exist from those who have looked closely for these ‘churches’ in faraway lands to show beyond doubt that ‘pop up and die churches’ are now the norm within the new missionary world.

In 2008, I sat with the CEO of a major sending agency explaining the idea of what Radius would be doing to training missionaries to actually share the gospel clearly and plant REAL churches.  His reply, speaking of his own missionaries, “Wow, I’d love to actually SEE some of what my folks are always saying is ‘happening just over those mountains’.”  I kid you not.  Today hyperbole, inflated numbers, and exorbitantly exciting stories compete for missions headlines and missions dollars.

Missionaries are pretty honest folks, and when they can speak candidly most will tell of ‘what is’ and ‘what isn’t’ happening.  But today there are some ‘storytellers’ out there.  They rarely speak of what they have done but focus on telling the stories of others.  They author a few books, gather funding, and tell new gospel ambassadors to embrace what ‘works’!

I have seen booming college ministries and I loved being a part of an ACTUAL, Spirit-generated, outpouring (the largest youth group in Southern California) in my early years of faith.  But that is a far cry from spawning 100 churches, or 20,000 as one popular author continues to state.  We must remain grounded in some sobering realities…Bible studies and youth groups aren’t churches. Actual churches take time to plant.  Spiritual maturation has limits.  Even as our children can’t act like 25-year-olds when they are only 4!  For those who cite Paul’s situation let’s remember he, by in large, spoke in synagogues to a core of Jewish people who had a great knowledge of scripture, who were waiting for a Messiah.  They allowed Paul to fill in the gaps with scripture…and then embraced Jesus as Lord.  Comparing that with working with Animists, Buddhists, Muslims or Hindus today is to overlook some serious issues and obstacles.

If the missions world is to be taken seriously genuine efforts at verification must become normal. In Acts 8:14, when the apostles in Jerusalem heard the unbelievable news about the Samaritans they sent Peter to verify.  Again, in Acts 11:22, when the church in Jerusalem heard about what was going in Antioch they sent Barnabas to check it out.  May His church today recover the same diligence, and energy, to verify what some are saying is happening.  If error is being propagated (By passionate, Jesus loving folks…it happens!) don’t we want to know?  Verification in a cross-cultural situation IS difficult, but it can and must be done.