The Role of Suffering in Missions 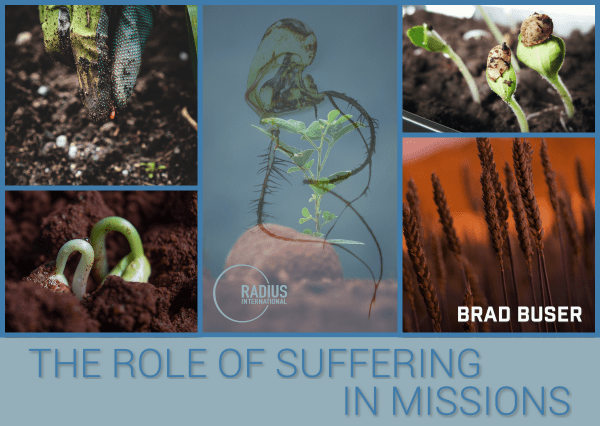 There are many components to the 9-month course at Radius and, although it may look like a random layout at first glance, there is a lot of thought behind nearly all that we do.  At the beginning of the course, phonetics, spiritual disciplines, team building, and basic church planting are woven together, but for the next few weeks, now that the newness of the course has worn off, a module called Theology of Suffering gets addressed. We will look at the lives of William Tyndale, John Paton, and Adoniram Judson and how they sought the Lord in the midst of their service and various sacrifices.

Remember the immutable law of spiritual multiplication that our Lord gave in Jn. 12:24,25. “I tell you the truth, unless a kernel of wheat falls to the ground and dies, it remains only a single seed. But if it dies, it produces many seeds. The man who loves his life will lose it, while the man who hates his life in this world will keep it for eternal life.” We must be careful to keep in mind what a seed goes through to bring life.  Jesus is saying there must be something akin to the death of those seeds for life to spring out of them.

Seeds are taken off the husk, their place of life and comfort, their natural habitat.  Then the seeds are buried in the darkness of the ground, go through the rotting process as the hard outer shell withers until the new life within pushes out and finally reaches the surface.  It doesn’t happen fast and no one besides the farmer knows they are there in the ground.  There are no brass bands cheering them on, the whole process is quietly done. The ‘ego needs’ of the seed are irrelevant. In many ways, this is the life of the pioneer missionary.

The long separations of the pioneer missionary from church, family, wives, and sometimes even their children only make ‘sense’ if Jesus actually meant what he said in Luke 18:29,30, “And he said unto them, ‘Verily I say unto you, There is no man that hath left house, or wife, or brethren, or parents, or children, for the kingdom of God’s sake, who shall not receive manifold more in this time, and in the world to come eternal life.’”

John Piper would say in his classic book “Afflictions are not merely the result of missionary fruitfulness, but also the means.”[1]  The Iteri people we lived among saw the diseases we endured along with them, they saw the separations from our kids, and had a growing sense of the price tag we paid to live among them.  John Paton lost his first wife and child in the New Hebrides on the way towards seeing the gospel finally break out on those islands decades later.  Adoniram Judson would lose two wives in Burma and multiple children before the gospel took root and moved out into the whole of Burma.

In contrast to our current age where even the church is told “We are meant to thrive!” we see Paul telling Timothy something quite different in II Timothy 2:3, “Endure hardship with us like a good soldier of Christ Jesus.”  Paul’s call was to endure well.  Only through the lens of the most thoroughly indoctrinated 21st Century modern world would we ever think of the early church singing about thriving. Faithfulness, holiness, boldness, unity, the clarity of the gospel…those were the things on the mind of the early church.  And make no mistake, those who desire to pursue a future as pioneer church planters are affected by current expectations. Thus, we give hours and hours to making these students aware of what is ahead, what MUST be ahead of them, if they are to be fruitful.

Again, the words of Paul to Timothy (II Timothy 4:4, 5) “As for you, always be sober-minded, endure suffering, do the work of an evangelist, fulfill your ministry” are just as much for today as 2000 years ago when first penned. Yet it would be wrong to see Paul as a fatalistic, depression-prone, masochistic individual who desired the same for others. Paul would direct the church in Philippi to “Rejoice in the Lord always. I will say it again, Rejoice!”  But we must keep in mind that this exhortation is written from a cold jail cell, not from a Christian campground in the mountains. Our ability to be constantly rejoicing is based on the sure relationship with the One who satisfies our soul when all else is as loss. As Asaph, the writer of Psalm 73:25 wrote, “Whom have I in heaven but you? And there is nothing on earth that I desire besides you.” As Paul wrote earlier in that epistle to the Philippians in 1:21 “For me to live is Christ, and to die is gain.” That should be the mindset of each of us, it MUST be the mindset of the pioneer church planter or it is folly to head overseas.

In the marvelously told story written of 23 young men, from the same small town in Virginia, who landed on Omaha Beach[2] in 1944, the author recounts how there were two types of young men in those Higgins boats.  Some that were clinging to life and those who already had come to the point where they anticipated they would die that very day.  It would be those who had ‘already died’ before they hit the beach that eventually won that day. We must ask the question, “Shouldn’t the pioneer church planter have a similar mindset?”  I don’t think we have to wonder how the Apostle Paul would answer that question.

Those missionaries who went to Africa packing their belongings in coffins were not looking to return to England. Amy Carmichael would serve in India for 55 years…and die in India. When asked by a potential missionary, “What is the missionary life like?” she wrote back, “It is simply a chance to die.” Can such consecration even be envisioned in the day and age we live in?  It must be, or the churn of missionary attrition will not lessen!  The sacrifices to be made by those going to language groups without the gospel may not be in lives lost in physical death, but in decades and decades of sacrificial living in remote, closed, inhospitable locales.

To equip pioneer church planters with all the skill sets needed but to leave this key area unaddressed would be grossly incompetent. To not do all we can to prepare them so that they will not be surprised by the fiery trial that will come upon them OR for the years of tedious monotony they will face in taking the gospel to the ends of the earth…we would truly NOT have prepared them. That is our job as trainers.  As students, it is their task to count the cost that must be paid to be effective pioneer church planters.