The Accumulation of Small Sufferings 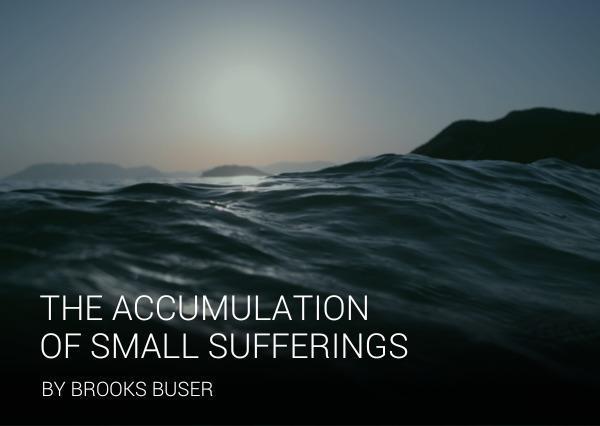 When I was in my third year of church plant consulting overseas, I visited a missionary team on a remote island 80 miles offshore to help with their church planting kickoff. On our way to the island, the seas picked up and I found myself in one of the scariest situations of my life. The storm grew so large that our small skiff would motor up one wave, clear the water, then motor down the other side to maintain control. At one point, the waves were breaking over the boat so strongly that one of the children (a fellow consultant had brought his family) was swept down the 18-foot boat and just barely saved by her father as he caught the straps of her life jacket. After seven hours we finally reached the island. I have rarely known such thankful joy and complete exhaustion.

Paul knew this kind of life. After my boat encounter, I read Acts 28:2: “The native people showed us unusual kindness, for they kindled a fire and welcomed us all, because it had begun to rain and was cold. When Paul had gathered a bundle of sticks and put them on the fire, a viper came out because of the heat and fastened on his hand.”

I had never before understood the magnitude of those two sentences. Paul, after many days of being driven across the Adriatic, after being shipwrecked, swimming to shore on driftwood, being rained on—still was part of the group that gathered firewood. Paul did not see what he had gone through as a reason to do less or to cease leading the men God had given him. He could easily have given the job of firewood collecting to someone else, but he kept going, even when he was surely weary and fatigued.

One of the aspects that I love so dearly about the Radius program is that it gives each student the opportunity to see how they do when they are tired, occasionally hungry, out of their home environment, and still part of a team that needs them. Nearly everyone does well when their bellies are full, they’re well rested, unafraid, and in a comfortable environment. The measure of a person is when one, or all, of these things is taken away. How do they respond, where do they go, can they be counted on?

As I type this, I am at 30,000 feet, coming back from a Muslim country where I visited four missionary/local church/church planting teams that are in the “trenches” of life over there. One brother told us of three co-workers who had lost their lives and his heartache when their bodies were brought back for burial. Another spoke of missing his son’s college graduation, with his son’s blessing. “Dad you should stay—your visa in country is too precious to chance on coming home for my graduation.” It will be even harder when his other son gets married in five months. Sacrifice comes in many forms. It’s usually not at the end of a gun but rather in the simple things where the follower of the King lays down his life—in ways that never make a support letter.

Jesus repeatedly warned those who followed him that they must deny themselves, take up their cross DAILY, and follow him. Jesus never offered an easy life, but one of physical and emotional sacrifices that often come in small ways. Those disciples who looked for a less painful way of following Jesus were routinely exposed to the actual costs: the Son of Man had no home, no security in this earthly life; he was harassed regularly by those who hated him; and he laid down his life for his enemies. This is what he told his followers to expect for themselves as well.

Adoniram Judson once said, “If I had not felt certain that every additional trial was ordered by infinite love and mercy, I could not have survived my accumulated sufferings.”[1]One of the more heartbreaking aspects of this trip was hearing from the missionary teams whose co-workers had returned home due to the accumulation of pressure, tensions, and unfulfilled expectations. The tension of the government looking for ways to remove them, the two- to four-year battle of learning a hard language to true fluency, establishing an authentic business, the constant challenge of living in a Muslim country—it all takes a toll. There is a weariness that can come over a person when all this comes in regular daily doses.

Two passages of Scripture bring me much comfort when I think of the life that so many gospel ambassadors are living out today. Luke 24:45 recounts how Peter was exhausted from sorrow. He was unsure of what was coming and, though he wanted to, he was unable to stay awake when he needed to. But the other side is found in Acts 12:6. Peter is in jail, chained with a guard on either side, unsure of what the following day will bring, though death was most likely. And he sleeps. He sleeps so deeply that he is unaware when an angel shows up in his cell. He sleeps in the confidence that He who sees all, knows all, and controls all is watching over every detail of his life.

Each one of our students is being shaped and molded for a life that will be filled with regular daily cost. And if tomorrow they cross that great river, or have to say no to attending a son’s wedding, they will rest in a God who counts each tear and has ordained each sacrifice. No hardship great or small is overlooked by the Master. Each will have its just reward when that Great Day comes.